A Moment of Silence for Holy Week

The paroxysm of childhood memories spent with my father hit me yesterday when I saw the palm branches being waved by church goers.

Apparently, my father has a very big influence to me with regard to Religious practices. As the whole country commemorated yesterday the Palm Sunday, I was reminded of the many times I spent with him going to church every Sunday. He would hold my tiny hands while I waved the palm branches for blessings of the holy water. 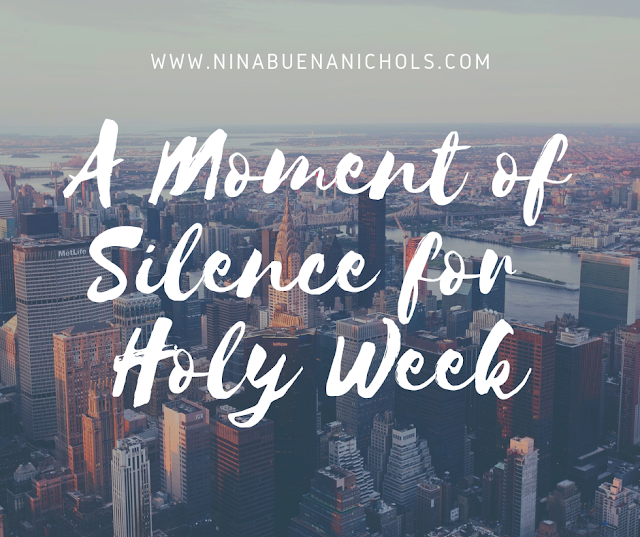 Palm Sunday as I remember it was the beginning of a quiet time at home. We were not allowed to play or even talk with loud voices- laughing was a big no. He would reiterate constantly the importance of silence because as he put it, “Jesus was already in agony”.

More than the reminder of peace was the story telling about sufferings of Jesus Christ. He would patiently answer my questions about God. Then, the daily masses would follow which my father attended conscientiously.

I vividly remember joining long processions which usually ended up at night time already. As a young girl, it was a very sad time for me. No playing, no laughing, and no running.

The family custom of observing Lenten Season starts with our annual “Pabasa” on its 3rd Saturday. This is a Filipino tradition of singing the book of birth, suffering and resurrection of Jesus Christ.

My father and mother started that practice for as long as I could remember. It became a yearly occurrence at home. Coincidently, it was also the time we celebrated the recognitions received by me and my siblings for being honor pupils of the school year.

The party was usually held in the morning then the start of “Pabasa” was around 4 in the afternoon. When my siblings and I grew up, that became our time of reunion since most of us live in far places already.

Generally, the group comprising the “singers” of our “Pabasa” was not really family members. They were old folks who have been paid to partake in the event and trained to last until 4 or 5 in the morning. They would munch “gugo” and drink “salabat” so that they would last till the next day.

Not all family observes this kind of practice so I guess in a way I was lucky for the reason that I truly enjoyed my childhood memories during our “Pabasa”.

The Holy Week was a different story though. It was a poignant memory of extreme sadness because there was this sudden shift with T.V. and radio programs. They only showed and aired nothing but lonely stories and slow music. It was a moment of solitude for me which I carried on until the time I grew up.

As the long week dragged on, I would start to anticipate the coming of Easter Sunday. I knew that my father would cook something special for us and we got to drop by in the house of our grandparents to receive some pesos from them.

Conversely, Saturday night before Easter is also the blessing of candles and water. Then early the following day would be the presentation of Easter angels. All the daughters of my eldest sister experienced being hanged as one of the angels. It was scary watching them being dropped from up above attached in a long bamboo.

After the Easter Sunday mass, my father would then prepare delicious food for us. Finally, the loud raucous at home was finally back.

My father was gone for more that five years already. Yet, the memories live on in my heart. That little girl being guided by his loving hands is now fully grown up. My beliefs may be different from what I was brought up but the values he imparted remains inside.

As I observe the Holy Week this year, I remember and pray in a moment of silence the man who stirred not only faith but the kindness in a young girl’s heart...Papa.